Forty-three founding fathers of Epsilon Pi Chapter at the University of South Florida experienced the Rite of Iris and Ritual on April 22, 2017. Both were superbly performed by the men of Iota Xi Chapter at Florida Institute of Technology.

Chief Operating Officer Jack Kreman (University of Nebraska-Kearney, 2004) presented the Eversole Badge to Chapter President Josh Grant (University of South Florida, 2019). The president of every new chapter receives this gift to pass down to each president thereafter.

Edwards presented the chapter guide, Lee Lewis (University of South Florida, 2016), with the chapter Bible, Ritual books and robes. “It was a wonderful weekend highlighted by a flawless initiation ceremony conducted by Iota Xi Chapter,” Edwards said. “Local alumni led by Jim Vanderbleek, Mike Hanson (University of South Florida, 1977) and John Morehouse (Albion College, 1981) put in an extraordinary amount of work in preparations. Most of all, it was gratifying to see the faces of the new USF Delts as they wore their badges for the first time.” 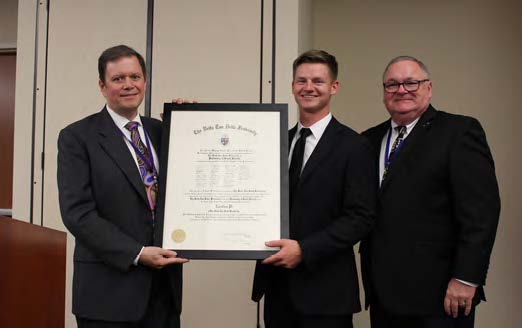 The installation was followed by a celebratory banquet where guests included IFC Advisor Thomas Strahan. President Garboden delivered a keynote address after presenting Grant with the chapter charter signed by all 43 refounders of the Epsilon Pi Chapter.